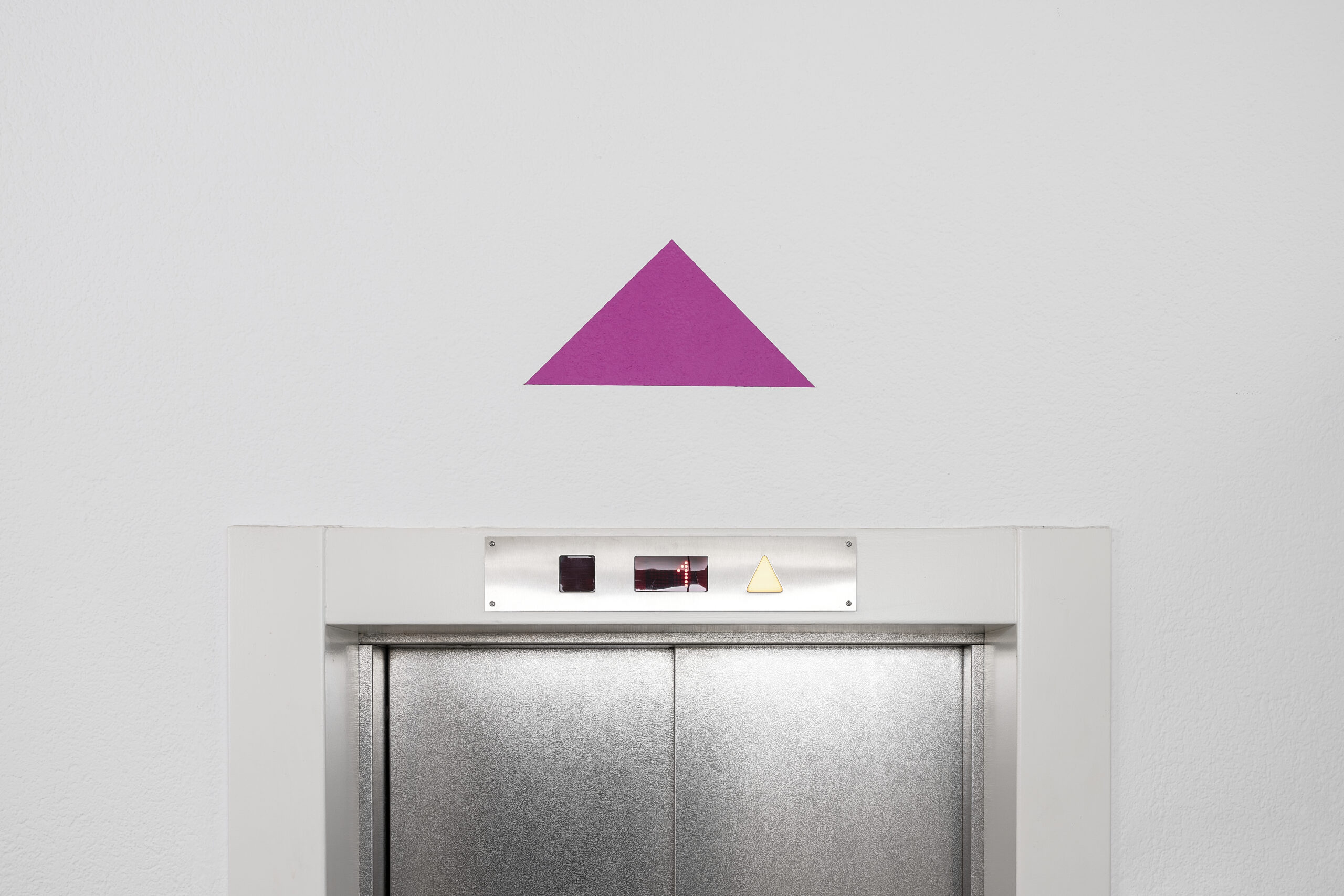 A Brief History of Triangles and Their Colors and Directions Etc.

Blaues Dreieck by Blinky Palermo from 1969 was editioned by Rene Block as a stencil for painting a medium blue triangle directly onto the wall. The initial ones were painted above doors with the triangle pointing upward, similar to the pediment of a Greek temple. The following year he had the blue triangle painted repeatedly in a straight line on the walls of one room at the Palais des Beaux-Arts in Brussels (such a cool way to do a museum install!). Later on, there were also black and mirror variants, with the triangle pointing downward in something of a more aggressive use of the shape.

In the mid-1980s, in New York, members of the AIDS activist group ACT UP were looking for a symbol that expressed their being part of the gay liberation movement and simultaneously pointed to the urgency of the rapidly spreading AIDS crisis. They came up with a pink triangle situated in the middle of a black field with the phrase Silence=Death written underneath in white all-caps, in what is now an iconic design. The pink triangle was, in fact, taken from the Nazi insignia used to identify gay prisoners in World War II death camps, but with the triangle turned upward so as to differentiate and reclaim it from this sordid history.

Triangles pointing up or down may light up outside elevators to indicate whether they are on their way. Or why not turn to the traditional Hindu Sri Yantra design consisting of no less than forty-three triangles, with the upward pointing ones symbolizing masculine energy and the downward pointing ones symbolizing feminine energy, that taken together indicate all the different forces and energies of the universe.

Benjamin Buchloh has mentioned that the blue of Palermo’s Blaues Dreieck might have taken some inspiration from Yves Klein’s use of and mythology-making around his International Klein Blue—even though Palermo’s color palette is a lot more varied, of course, including quite distinct browns and greens often forming some type of landscape abstraction. The pink triangle stencil I’ve made can be used as a prop in itself or for painting pink triangles directly onto walls, preferably in a hue similar to the one on the actual stencil (or any other color, in fact—you know, like feel free…). I wanted to make a simple object with a lot of different connotations—the more pastel or ‘baby’ hues of pink and blue recently quite militantly used for indicating the gender of newborn babies creating one last link between Palermo’s original stencil for making blue triangles and my more recent homage in this pink one. Enjoy!