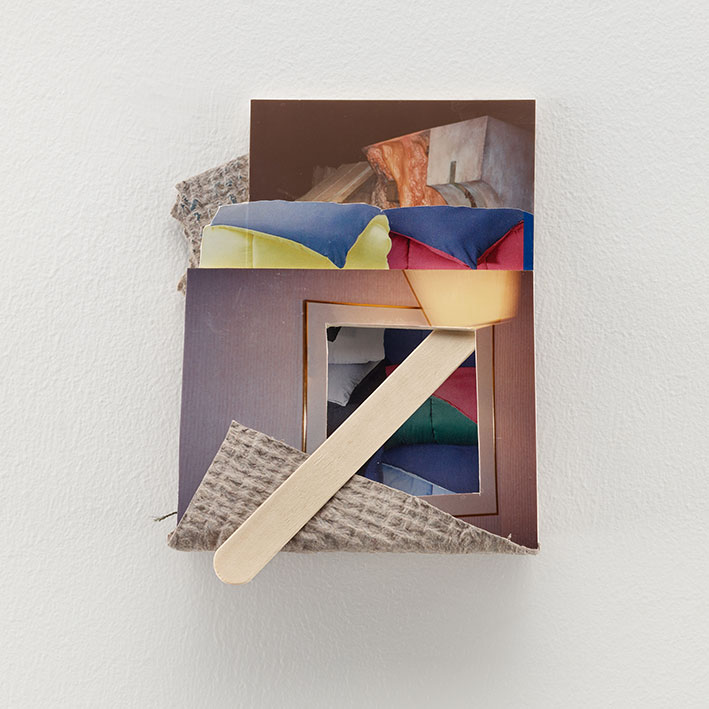 Since the early 1990s, Vincent Fecteau has been making sculptures and collages from simple, sometimes everyday materials, such as newspaper clippings, papier-mâché, foam core, corks, popsicle sticks, or shells, that display diverse manifestations. Some of his works are small-scale, rectilinear, monochrome, or abstract, while others are expansive, intricate, colorful, or narrative. They are the outcome of a long, intense creative process that begins with the selection and combination of materials. This is followed by the continuous and careful processing of these components until the multifaceted nature of each object is articulated. Often, the properties of the chosen media and the manual production method remain visible. During this process, Fecteau does not subject himself to any conceptual framework; instead, his action is guided by intuitive responses to the various materials. The results of this approach are often difficult to describe in words. What at first appears to be clearly within our grasp, defies classification upon closer inspection. This predicament contributes to the enigmatic nature of Fecteau’s formulations and tempts one to engage in the manifold associations the artist’s sculptures and collages generate. His objects evoke images of model-like architectures, stages, and showcases, but also of bodies, limbs, and organs. However, these notional associations and ideas are very hazy and largely dissolve swiftly into abstractions. Despite their ambiguities, the works repeatedly reveal art-historical references. Thus, allusions to the formal languages and approaches of the avant-garde movements of the early twentieth century, postwar art, and postmodernism can be discerned. At no point, however, does Fecteau give the impression he is indulging in reminiscence. Quite the opposite. The works leave no doubt that they are testaments to their time. This can be detected both in their formal characteristics and in the exploration of queer forms of identity, life, and culture often manifested in them. In this regard, Fecteau’s preoccupation with values, ideas, and perspectives that can be located beyond heteronormative worldviews is informed by his personal experience of the AIDS crisis of the 1980s and 1990s, as well as the social changes accompanying it. The importance of his work for contemporary art discourse thus results not only from its compositional finesse, poetic force, and pronounced obduracy but equally from its sociopolitical aspirations and basic empathetic stance.

Vincent Fecteau was born in 1969 in Islip, New York, and now lives in San Francisco. From 1987 to 1992, he studied at Wesleyan University in Middletown, Connecticut. As early as 1993, he participated in group exhibitions, which were followed by his first solo show at Kiki Gallery in San Francisco in 1994. The show The Scene of a Crime at the Hammer Museum in Los Angeles in 1997 marked the start of the reception of his work within a museum-related context. His first international exposure came with his participation in the Whitney Biennial in 2002, followed by solo presentations at the Van Abbemuseum in Eindhoven in 2004, the Art Institute of Chicago in 2008, Inverleith House in Edinburgh in 2010, Kunsthalle Basel in 2015, the Vienna Secession in 2016, and the CAA Wattis Institute for Contemporary Arts in San Francisco in 2019. In Germany, an institutional appreciation of Fecteau’s work has so far been lacking. The exhibition at the Fridericianum aimed to remedy precisely this. Based on over sixty selected works created between 1993 and 2020, the show provided a comprehensive overview of Fecteau’s oeuvre.